In addition to the pewter teapot and his broken watch, my Great Uncle Hamish left me a piece of useful advice. “Son,” he said on his deathbed (it was a very Victorian scene in a draughty castle complete with weeping servants..) “always prune your shrubs from the bottom up.” (*Note)

He expired before he could say more, but I later found a note in the teapot which said “P.S. Take out whole branches, and lots of them. Nothing worse than a haircut” Uncle Hamish was not an admirer of municipal-style light pruning. 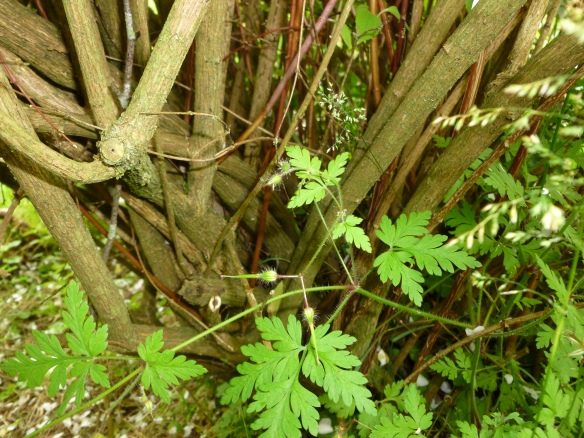 He’d have had trouble with this Philadelphus though.

There’s no real need to prune  Philadelphus at all, unless it starts looking constipated and producing less than the normal amount of flowers. But this one is surrounded by smaller plants, and will smother them if unrestrained. Also, it took a bit of a hit from last winter’s snow, and some heavy cutting back will restore its shape and stimulate new growth, at least that’s the theory, and it usually works.

Young Philadelphus shoots are usually a distinctive red colour – a helpful guide to what to avoid cutting. But they are also fragile. So pulling out large branches from the middle is not a good idea.

So, despite Uncle Hamish, I have to work from the top down and the outside in, removing the old wood gradually in small pieces until I get as close to the base as possible. Who knows, I might even manage to reach the fern, the hawthorne seedling and the young ash tree that have taken up residence in the interior.

All the snow-battered old wood on the right is for the chop. Philadelphus flowers best on second year wood, and it won’t miss the older stuff. 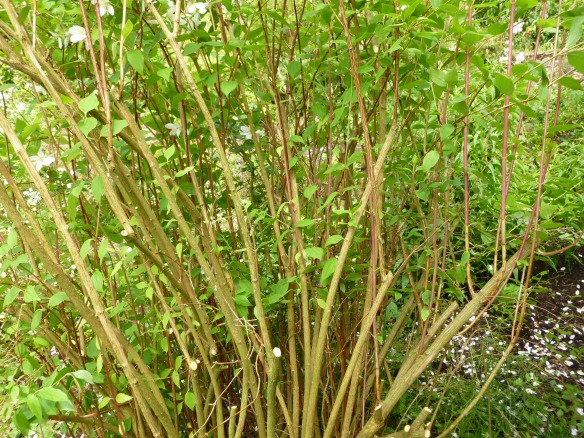 .At this point I have thinned out much of the old wood in the centre of the shrub and cut back in from the sides. At last I can get into the centre with pruning loppers and cut the stub ends of the thick stems. 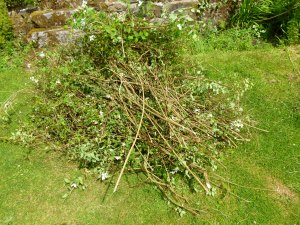 Meanwhile, the heap of cut branches grows. Not long ago I wouldn’t have dared take this much out in one go. Now, I’m much more reckless. Uncle Hamish would approve. 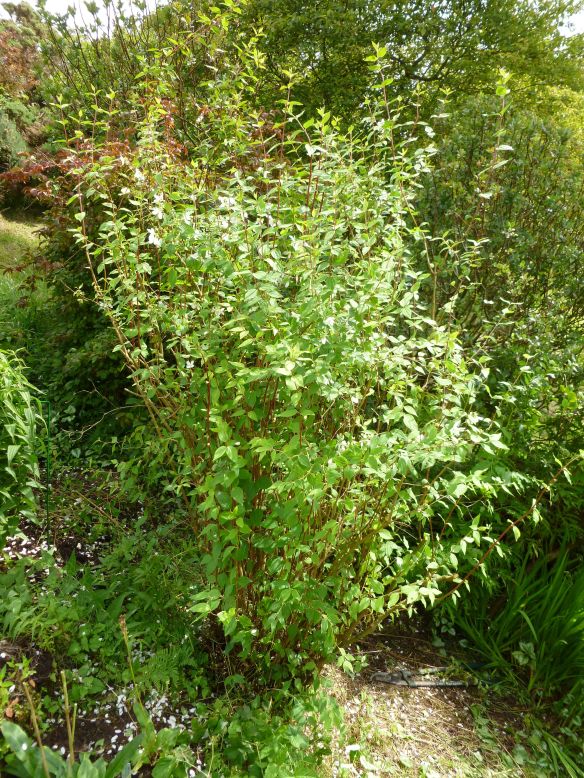 The final result. The bush is about half the size it was. It looks a bit bare, but the new growth will get much more light and air.

(For the next step, a year later, see this post)

Note*: Uncle Hamish was not hinting at an illicit relationship: ‘Son’ is a universal form of address in Scotland for any male under 50, except in Glasgow, where ‘Jimmy’ is used instead. Top

As I hoped, the hard pruning has done the philadelphus no harm at all. Last year’s young growth has produced a healthy crop of buds – and new growth is breaking from the old wood I cut back.  I may do a little more tidying once it has finished flowering, but probably there won’t be any need