Mine is usually a June garden, but this year it has mostly been a May one. That, I think, is mostly due to the frost-free winter. The June weather has not been wonderful, but the long evenings this far north mean that on the rare occasions the sun is out, the colours linger late.

The wild flowers in the garden seem to change year by year. The wild hyacinths (bluebellls to those of you down south) have spread rapidly over the past five years, and have been spectacular this season. The Solomon’s Seal (that blurred number in the background above) has also been excellent. On the other hand there is no sign this year of the butterfly orchids which were speading  over the bank. None. Not even a leaf. I trust they are only taking a rest. Here’s one from last summer:

As regular readers know, I like working with large blocks of colour (and am lucky enough to have the space to do so). One of my favourite combinations is Primula pulverulenta against the blue of the himalyan poppies. That’s not a mix I would want to see indoors, but outside it works surprisingly well. 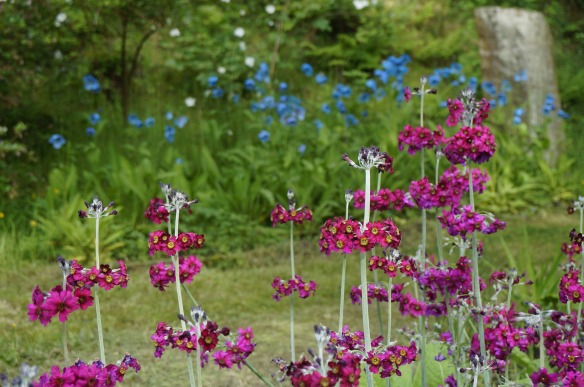 A fantastically useful plant for a big vibrant red/orange statement is Euphorbia griffithii ‘Fireglow’. Like all euphorbias, it is unpleasant to work with because of it’s corrosive sap, and it also annoys me because you can’t just snap off its dead growth in spring, but have to cut out each stem separately. But I wouldn’t be without it. I use it against a background of yellow whin. 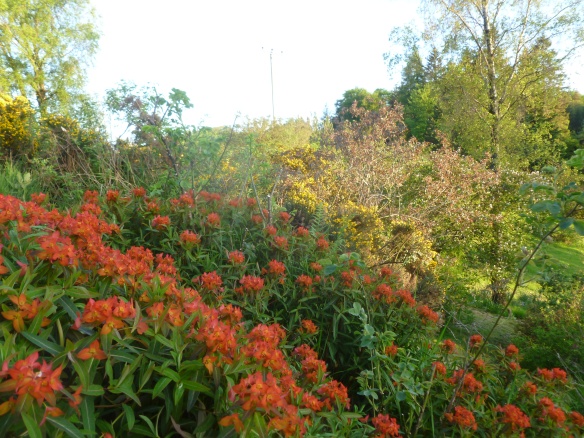 Finally, here’s a combination of rhododendron and azalea that pleases me. Unfortunately the timing is always just a little wrong, with the yellow not reaching its peak until the lilac is past it.

But I guess that’s life.

On of the plagues of keeping bantams is that when one hen goes broody, they all do. Whether or not there is any link to the controversial theory of menstrual synchrony, I am loathe to speculate, and – being a male – it’s really not my business. All I know is that having started off the season with collecting four eggs a day, I am now getting none, because broody hens don’t lay.

That is not the worst of it though. When one of the hens takes ten minutes out for a drink or a breath of fresh air, the chances are high that one of the others will decide she prefers the eggs of the absentee and will simply take over. This leaves her own eggs growing cold and the deprived owner strutting around in fluffed-up fury (but of course refusing to do a straight swap). The only hope is to separate them all into their own individual runs, but this involves a nightmare of hammering together bits of wood and wire netting, which I hate…

On a happier note, Fluffy has now become a mother. We last met Fluffy as a deprived adolescent, ripe for the attention of social workers.

During the winter she has grown through the awkward phase, and, though no beauty, is at least respectable.

She has one yellow/white chick (which must be hers)

One black chick (which is definitely someone else’s) 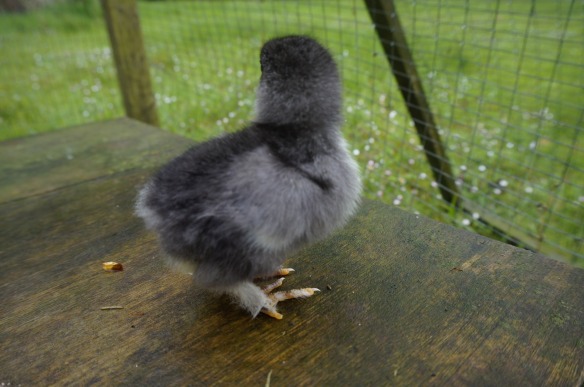 And two brown speckled chicks (which could be anyone’s)

These chicks are two days old, and virtually self-sufficient. When you think that, as a human, you have to hang around for at least a year before your offsping can even feed itself properly, you do have to wonder what claim we have to be top species…

Somewhere with a few mountains

And some blue sea 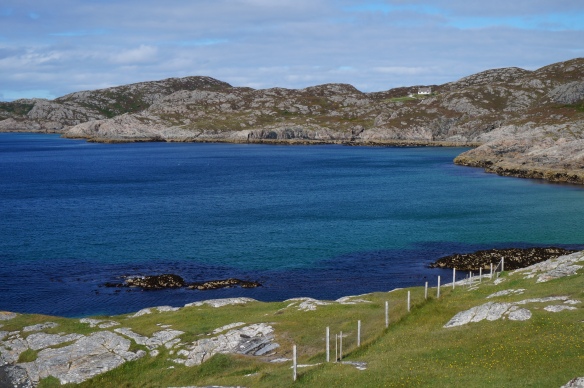 But returning to a September garden is a reminder that there’s stuff to be done. It’s heavy manual work too – no more springtime wandering around looking for new growth and pulling out the odd weed. Instead, it’s cutting back the dying jungle of grass, hoping that this will pay back in a better wild flower display next year. The wet grass burns with that delicious autumnal scent; the thick smoke writhing up in the sunlight 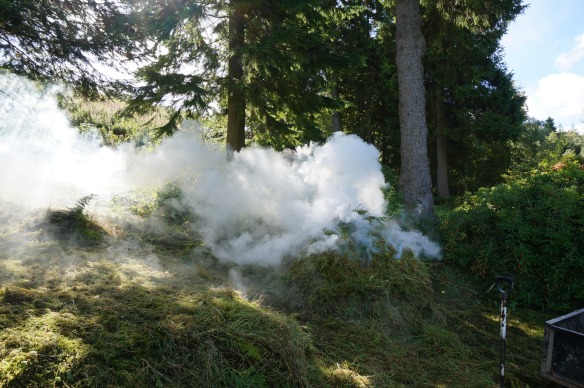 The there’s the firewood to cut, split and stack. But when these things are done, I shall contemplate the onset of winter with a degree of equanimity 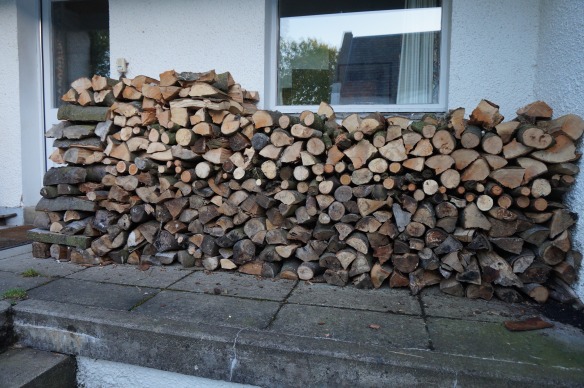 It hasn’t rained for three weeks. This is unheard of. Exceptional. What’s more, it’s reliably warm and sunny. What has happened?  I’m disgruntled; I have nothing to complain about. Even the grass is barely growing.

I’m especially pleased, because this is the time of year when shrubs are contemplating next year’s flower buds, and the more they are lulled into thinking that it’s safe to put a bit of energy into that endeavour, the better next summer’s display is likely to be.

The other good thing is that we are sweeping into the Time of the Fragrance, led, as always, by philadelphus. Drifts of the scent sweep up the bank as the heat goes out of the day. 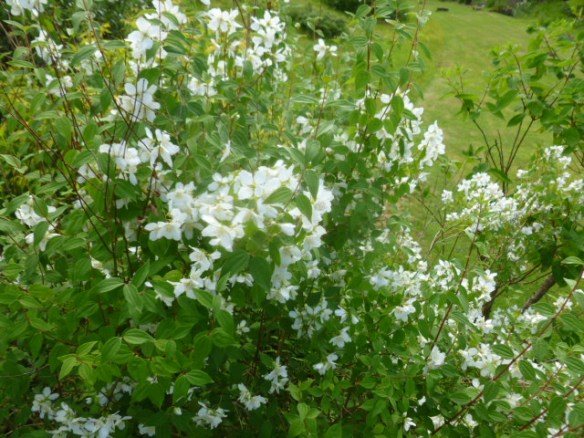 (I fear the lense on the camera is scratched. Comes of keeping it in my pocket along with secateurs, the odd nail, cherry stones and fragments of bantam food. So apologies for the picture quality meantime…)

Honeysuckle contributes, less intense, more concentrated within the flower. There are so many cultivars of the climbing honeysuckle Lonicera periclymenum, that it’s hard to choose. But if you want scent rather than colour, it’s a good idea to stay close to the species. Mine has been good this year: often it suffers from fly, which ruins the flowers unless you spray it early enough in the year

There’s also this rose: ‘Ispahan’  – one of the few roses that I can really be bothered with.  A damask rose, growing happily through a viburnum to eight or nine feet; minimal maintenance, zero pruning unless I feel like it, and usually pest-free. And wafts of scent to reward me for my neglect. If only all roses were like this… 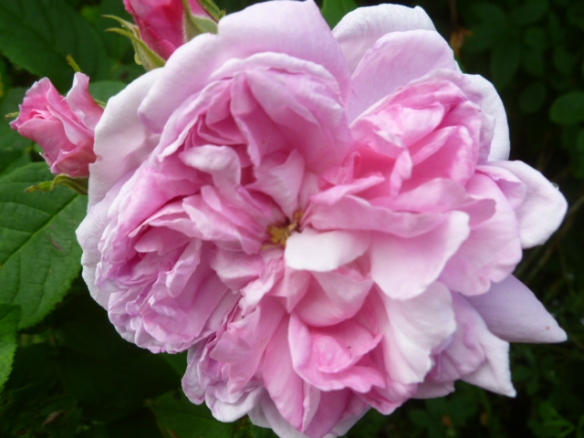 It has also been a great year for meadowsweet – filipendula ulmaria – the plant that lies behind asprin.

This grows wild in all the damp places in my garden – i.e. most of it, and I count it as a pernicious weed, because its creeping rhizomes smother stuff, such as irises, which might be trying to share the space. But when it’s in flower, with its strange half-bitter fragrance, I relent.

Finally, at the risk of boring everyone rigid, I can’t resist another picture of this campanula lactiflora. It has gone completely mad. 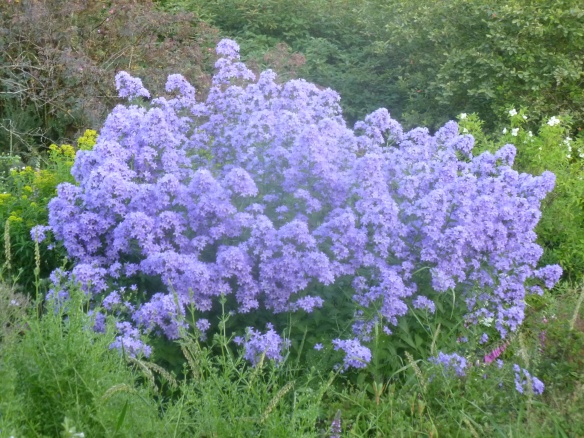 I always forget, as I run around in May and June planting stuff and keeping the garden relatively clean, that July is different. Quite suddenly, plants, grass, weeds, unwanted tree seedlings – in fact everything – just grows, without showing the least modicum of restraint or respect. Fecund to an extreme. Two weeks ago, you could walk along a nice path in the herbaceous border. Now, you have to wade through it.

At the same time, serious gardening becomes impossible. Usually it is the rain. This year, remarkably, it is the heat. But mostly it is the midges. They are especially ravenous this summer, even in the sunlight, which they normally avoid.  I suppose they hatched late because of the cold spring, and are now desperate for their blood meals (how I hate that phrase!) so they can breed again. Vampires have nothing on these creatures. Research shows an isolated gardener can be attacked by 40,000 midges an hour. I believe it.

July is also when you notice all the plants that are in the wrong place, or have grown too big. The campanula lactiflora in the picture above was once a well behaved component of the border, but it has gone rampant. You can’t move campanulas this size, so I shall either have to expend heavy labour hacking it out, or else live with it.

This gunnera is obviously bent on world domination too. I merrily planted it thinking it would provide some shade for a few primulas. Now there are no primulas, and it’s about to attack the white flag iris in the background. Then it will start on the bridge.  Sneakily, it will die back in Autumn so that I’ll forget about it and fail to do anything to stop it.

This should be peak season for primula florindae. But they are having a tough time of it in the unaccustomed heat, and flop badly as soon as the direct sun hits them 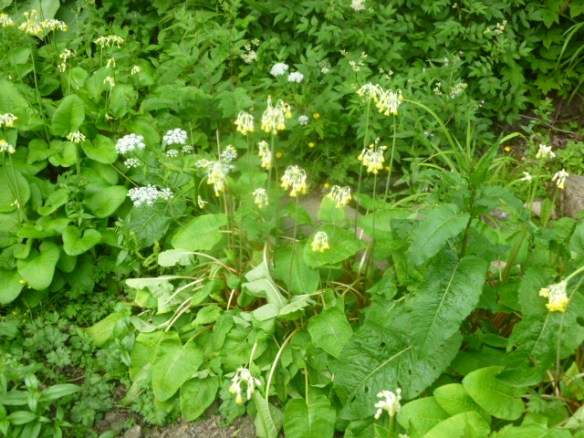 They then have to spend the cool of the night pulling themselves back into shape. They are not built for sub-tropical temperatures. But they are tough; and will survive – but unless we get a lovely cool day with lots of  rain soon, (It’s not often you find me expressing that kind of wish!) I’ll miss out on the fragrance drifting over the pond.

Most of the colour has gone from the garden now, except at the top of the ‘creek’, where the remains of ‘Inverewe’, the water irises, and a big white persecaria combine well.

“Spring comes, and the grass grows by itself.” :  Zenrin Kushû

One of the oldest habits we have is to walk up and down a patch of land. Usually we had an animal with us; a horse, an ox, a buffalo. Sowing, ploughing, reaping. Up and down. Every time we take out the mower, we continue this. We no longer need the animal, more’s the pity. But it was not so long ago: 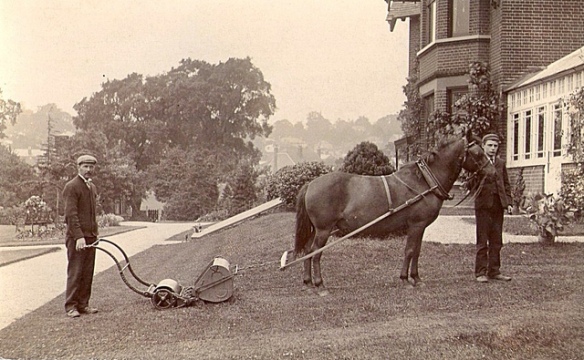 When you mow, cutting the grass in a rhythm you have learned from doing the same thing dozens on dozens of times over the years, with every  hummock and curve a known friend, the mind blanks. It ceases to be a task. It ceases to be anything. Each time you pass, say, a familiar ragusa rose, you see its shape at a fractionally different angle. A kaleidoscope of colour and shape. The memory assimilates better than the camera. 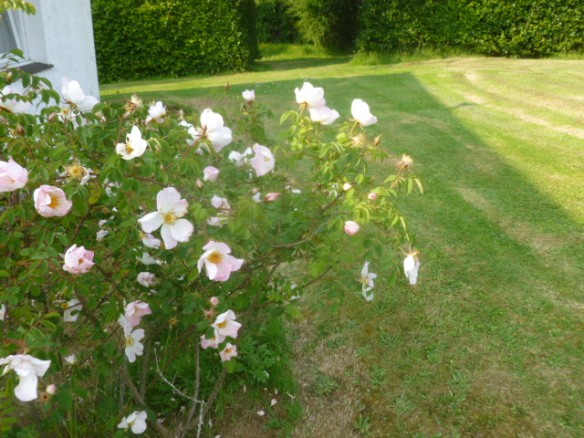 In the unmown grass, small flowers bloom. One pass, and they are compost.

‘People of the world look at these flowers as if they were in a dream.’ 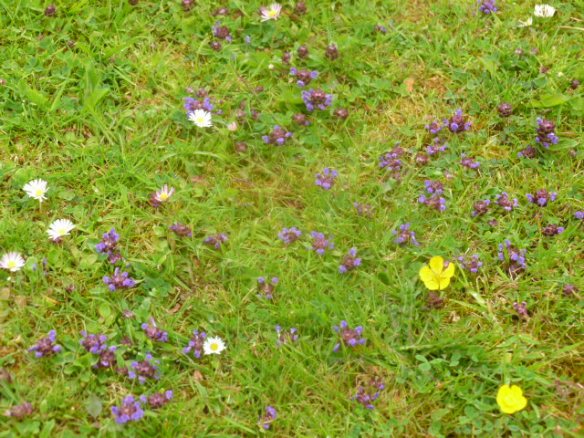